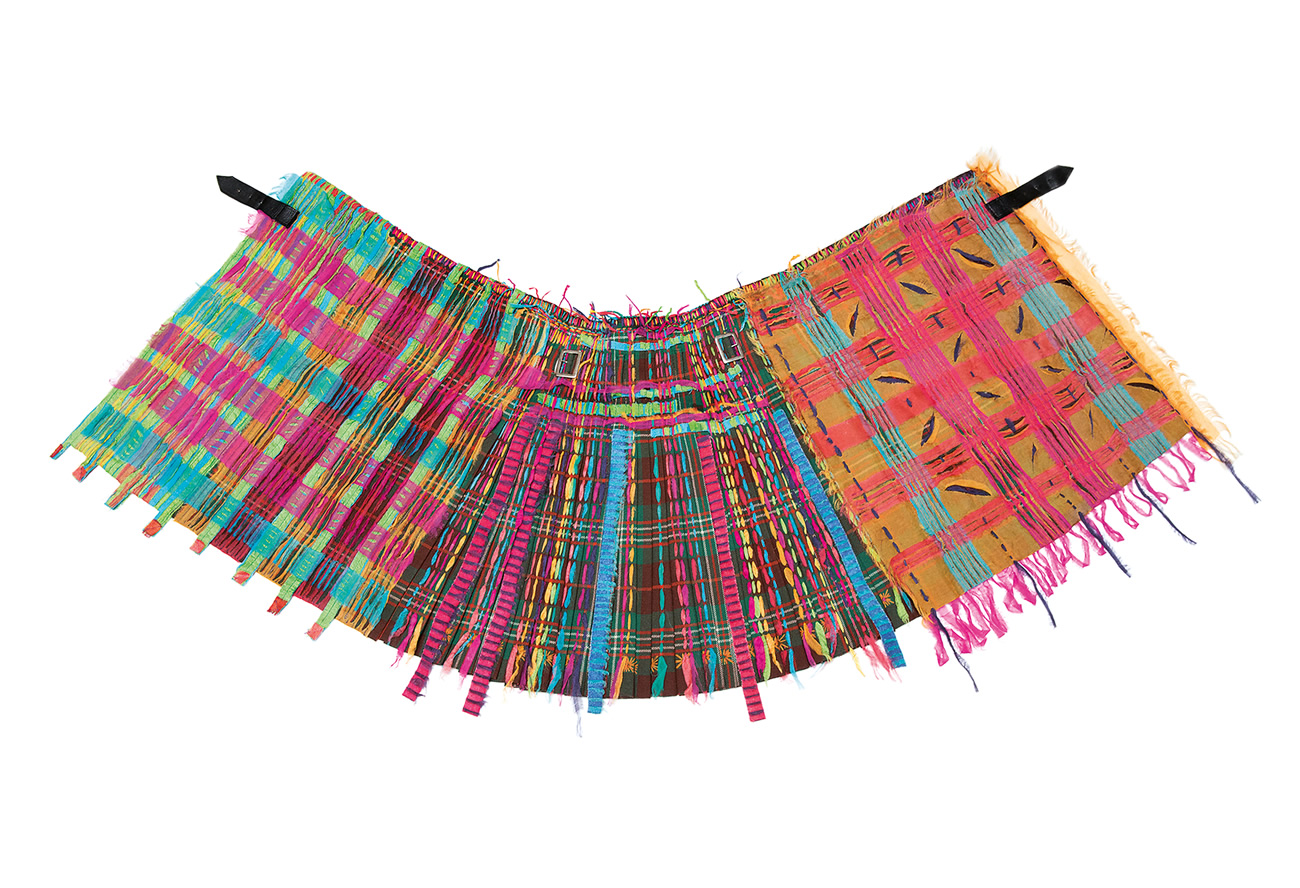 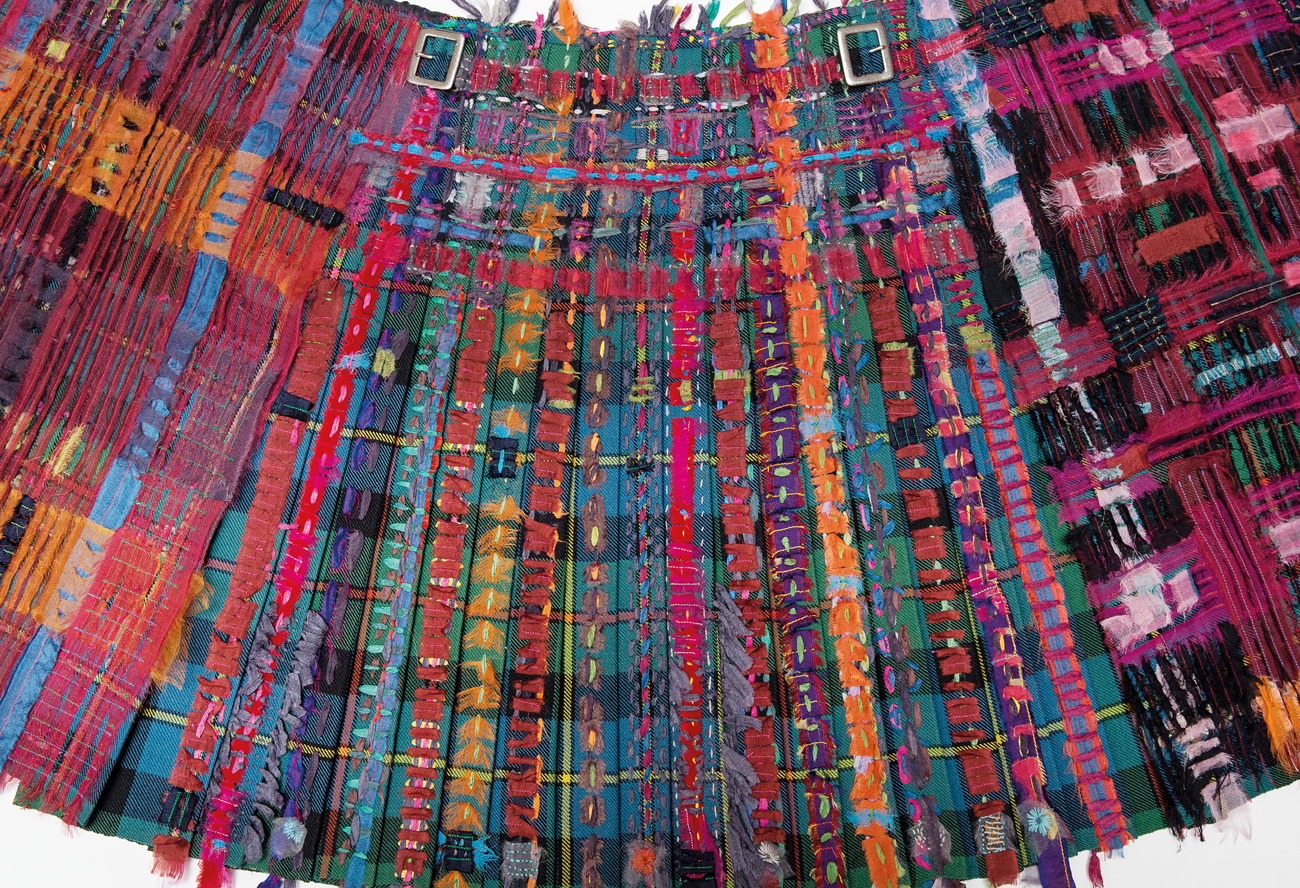 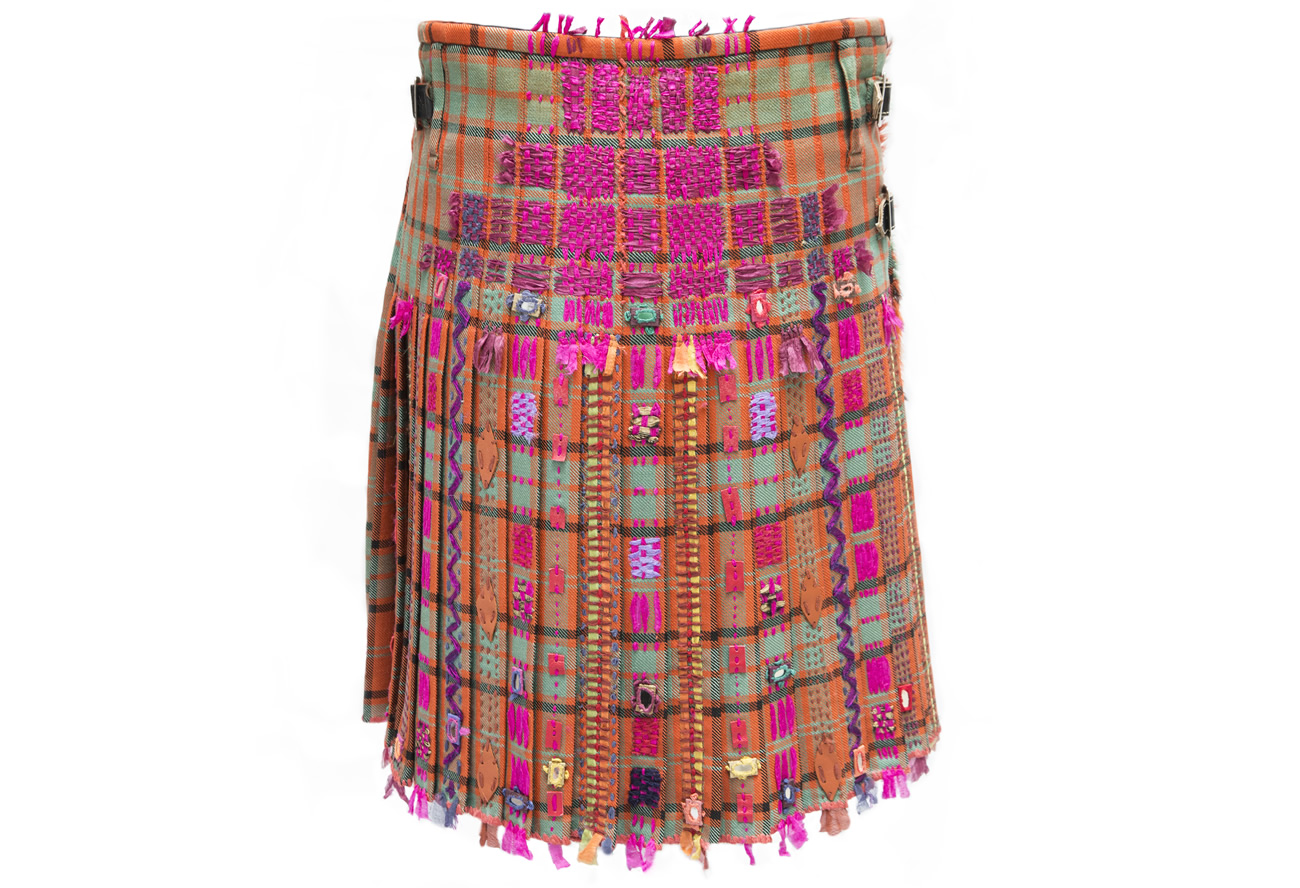 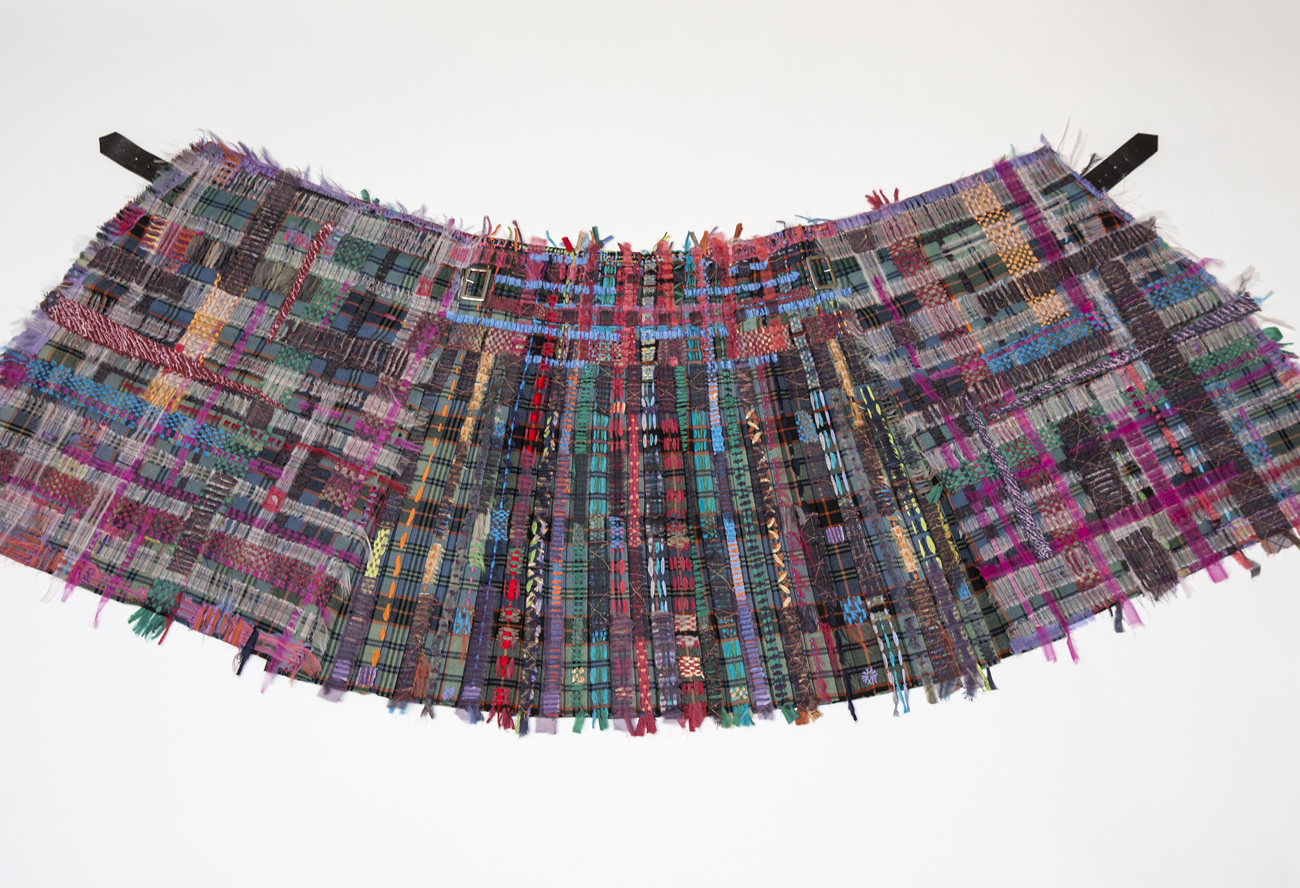 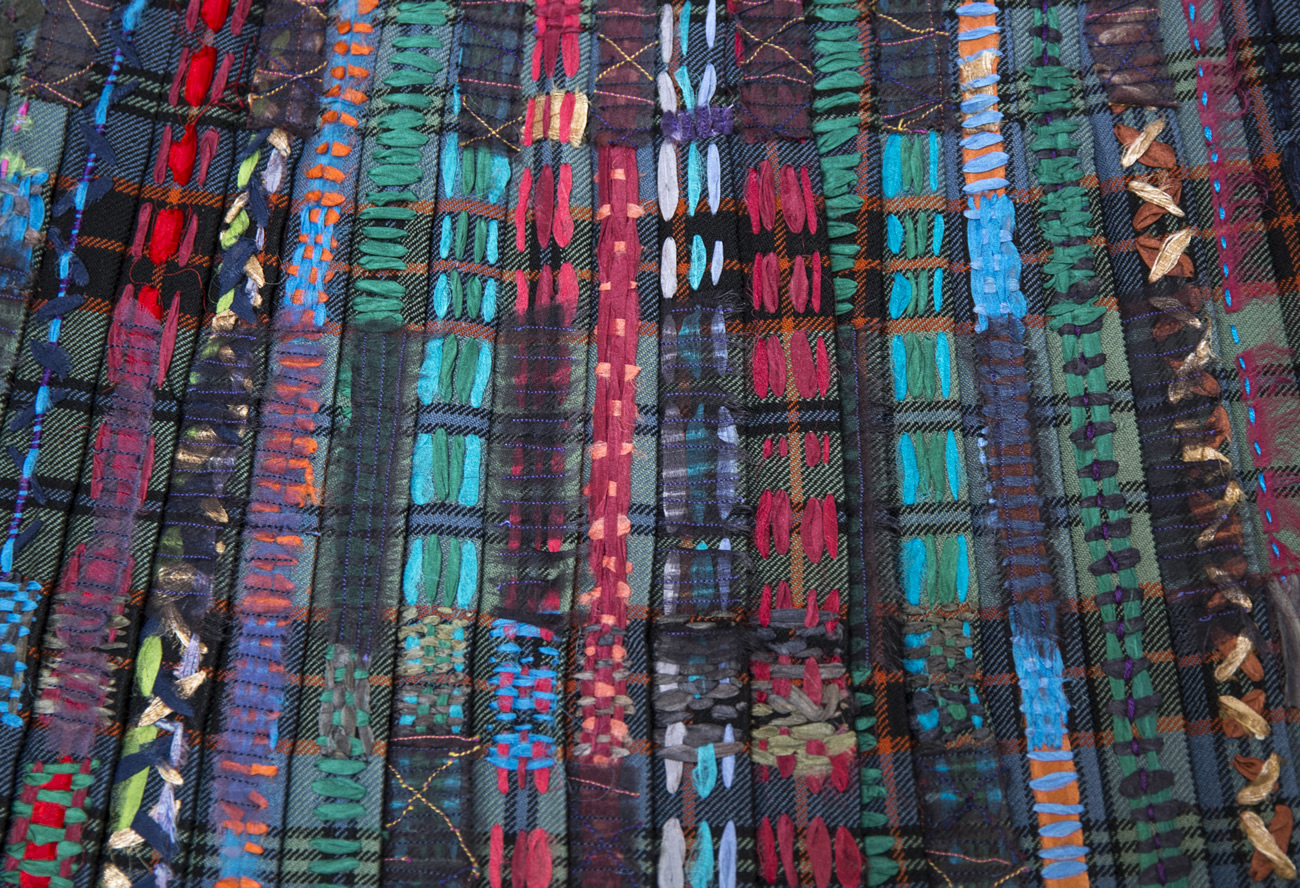 In the beginning the “Millennium Kilt: was only an idea, a vision which I held in my mind’s eye. And, in that location, for a period of almost ten years it stayed, never leaving my subconscious, always there with me.

“Millennium Kilt No.1” was started at the end of 1999 and completed three months later for a major exhibition at the McManus Galleries and Museum, Dundee. The “Millennium Kilt No. 1” won first prize. As a result, it was exhibited at the Victoria and Albert Museum, London, in an exhibition titled “Men in Skirts”, curated by Andrew Bolton. Following the Exhibition, the Victoria and Albert Museum wished to purchase the Kilt for its collection as did an Aberdeen oil company. I turned both offers down as the piece was too precious to me to part with. The oil company, however, was determined to have a Millennium Kilt and asked me to create one for its collection. This I agreed to do and “Millennium Kilt No.2 Philabeg” was born into this world.

I felt really energised while creating “Millennium Kilt No.2 Philabeg” and understood that more kilts were out there, each with its own distinct personality, impatiently waiting for me to bring them into the world. This I have done and continue to do.

In 2015, I began creating “Millennium Kilt No.5 Wild Thing”. Taking a kilt that I had earlier embroidered, I un-embroidered or stripped away much of the work which I had previously stitched onto the surface. This un-embroidering I do is a very important part of the whole creative story. Un-embroider, incidentally, is my own term. It is not a word found in any dictionary. The original tartan surface retains the memory of the tensioned threads which have been pushed through the fabric, leaving the surface with small holes and puncture marks. This retained memory effect refreshes and enhances the surface by adding a layer of complexity thus creating, in effect, a new textural surface. A rich mixture of fibres are woven through the base tartan fabric while others lie on top. Hand-dyed silks, wool and cotton velvet each add their lustre to the surface design. The surface is slashed, over-stitched and slashed again, creating an alchemy of colours which interlace and allow the eye to move across the piece.

“Millennium Kilt No.1” – Collection of the artist.